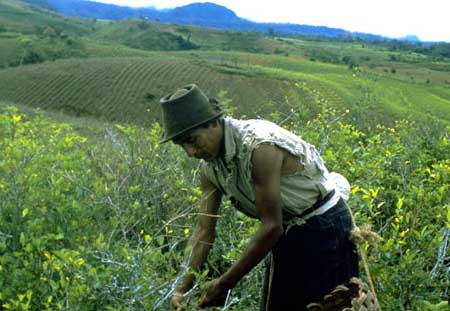 Coca can be harvested four times a year. Traditionally, chewing the sacred leaf promotes contact with the spirit world. Chewing or smoking coca leaves invigorates the user, allowing him to absorb the plant's magical powers and protect body and spirit alike. Ancient Peruvians used coca as a local anaesthetic before trepanning - the hazardous surgical technique of drilling a hole in the skull to relieve various physical and psychic woes.

Tales of the aphrodisiacal properties of cocaine eventually reached the Old World too. In his journal of 1794, Hipolito Unanue writes of "coqueros, 80 years of age and over, and yet capable of such prowess as young men in the prime of life would be proud of."

Later authorities made no less extravagant claims. In Der Kokainismus (1926), Swiss psychiatrist Hans Maier records: "After a night of sexual prowesses, compared to which the seven labours of Hercules were a mere nothing, I fell asleep, only to be immediately awakened by the renewed demands of my insatiable partner. I was able to verify on myself the degree to which cocaine renders women incapable of achieving sexual relation. Orgasm follows orgasm, each one further increasing the intensity of the desire. The most sexually potent man must eventually give up the hope of satisfying such a woman. There was nothing to do but flee in self-preservation."