Cocaine Addiction and the Brain: How Does it Work?

It is widely known that cocaine is an addictive substance, but not everyone understands how it works; how it produces its effects and how people become addicted to it. The interactions between cocaine and the brain are well understood by scientists, thanks to effective research, and so science is able to answer these questions.

Cocaine use interferes with and actually changes how the brain normally functions. Specifically, the drug acts on the brain’s reward system, a system in which certain neurotransmitters are affected. Dopamine is one of the primary neurotransmitters in this process. According to the National Institute on Drug Abuse, a normal dopamine communication in the brain goes like this: dopamine is released into the synapse by a neuron. There it binds to dopamine receptors and sends a signal to the neuron that it is bound to. It is then removed from the synapse – because of the signal – and is recycled for further use. Cocaine interferes with that exact process.

According to McGill University, cocaine interacts with dopamine, norepinepherine, and serotonin, three very important neurotransmitters. It blocks the reuptake of these chemicals in the brain by binding to the transporters that usually remove the excess of the neurotransmitters from the synaptic gap. This essentially prevents them from being reabsorbed, and instead their concentration is higher than usual in the synapses. Dopamine is implicated in the production and development of dependency, serotonin produces feelings of confidence, and norepinephrine interacts with energy levels.

Having a higher concentration of dopamine amplifies the neurotransmitter’s natural effect – which is to recognize reward and pleasure. Dopamine is involved in the unconscious memorization of pleasurable, rewarding signs and actions, and the way cocaine interacts with it tricks the brain into thinking that cocaine is good, or is a reward and something to seek out. A study found in the US National Library of Medicine shows that the nucleus accumbens, part of the limbic system, is the most important site of the cocaine high.

How this Interaction Produces Cocaine Dependence and Addiction 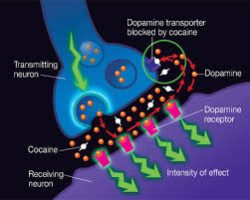 McGill University reports that the brains of chronic cocaine consumers come to rely on the drug. Their brains get so used to the high degree of pleasure experienced when using cocaine that they continuously seek out the elevated levels of the reward circuit neurotransmitters.

The brain can also adapt and change in other ways as a result of chronic cocaine use. In fact, the postsynaptic membrane can actually manufacture new receptors, which results in increased sensitivity to neurotransmitter levels. It is in these cases that depression and cravings are very intense upon ceasing cocaine use.

In addition, the limbic system – which is implicated the most in cocaine use – includes the hippocampus and the amygdala. These parts of the brain are important for memory, and are responsible for remembering what we did that led to pleasures associated with dopamine release.

The frontal cortex helps us to forgo pleasure to avoid its negative consequences, and it is this region that helps nonaddicted people avoid using cocaine. However, once someone becomes addicted this brain region is impaired.

Notes on Cocaine Addiction and the Brain

One thing worth noting concerning cocaine and dopamine is that dopamine and the brain pathway is very old in evolutionary terms. This means that cocaine alters something in the human brain that is essential to survival, and thus affects the individual in powerful ways.

While this information greatly helps us in understanding the processes behind addiction there is still quite a lot to learn before we truly understand how drug addiction works and how we can treat it.