Cocaine Anonymous is a fellowship of men and women who share their experiences, strengths, and hopes in recovery from cocaine addiction. The members of Cocaine Anonymous groups work together to maintain their individual sobriety as well as to help one another to overcome the struggles that often arise whenever addiction is concerned. There are no monetary requirements in order to be an active member of Cocaine Anonymous, members must simply want to stop using cocaine or other mind-altering substances.

When Did Cocaine Anonymous Begin?

The groups that now make up the worldwide chapters of Cocaine Anonymous are mostly derived from the original 12 step program itself—Alcoholics Anonymous. Cocaine Anonymous groups have been around since 1982 when a long-standing AA member formed the first CA group in Los Angeles. He was a professional in the film industry and understood firsthand the troubles that those who abuse cocaine were suffering from. It was his plan to help those who were addicted to Cocaine to find the friends, support and help necessary to overcome cocaine abuse and addiction. Thus, the first Co-Anon was formed in 1982. It wasn’t until later on that Cocaine Anonymous would become to be widely recognized and understood.

Cocaine Anonymous (CA) meetings have very limited requirements. Members do not have to pay any dues or membership fees in order to be a part of Cocaine Anonymous groups. CA groups are fully self-supporting through the contributions of those who choose to donate to the program. Voluntary contributions are collected at each CA group meeting but the only real requirement for membership is to have a desire to stop using cocaine or other drugs.

Cocaine Anonymous groups have a number of different types of meetings that members can attend. The most common meetings are either open meeting or closed meetings. Each is labeled as such based on the level of commitment that a visitor or member of the meeting must have to his or her own sobriety. For instance: 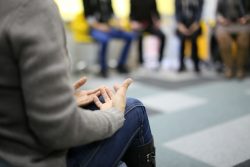 Cocaine Anonymous can help you recover!

All Cocaine Anonymous meetings share the same theme of getting those in recovery together to work towards staying sober and achieving goals in recovery from cocaine addiction. They are safe and do not allow members to be judgmental of others or to point fingers. Groups encourage open discussion and participation of those involved.

Many mistakenly believe that CA groups are affiliated with Christianity. While Cocaine Anonymous groups are spiritual in that they focus much of the recovery on 12 steps and a higher power, there is no direct spiritual denomination that members must believe in. Cocaine Anonymous members are free to define their spirituality in the manner in which they see fit and may be Jewish, Christian, Muslim or of any spiritual background they choose.

Every Cocaine Anonymous meeting is based upon the 12 steps and the twelve step recovery process. Utilizing the 12 steps, members work through the challenges of admitting to a problem, accepting a higher power to help restore the sanity following a problem, and ultimately helping others in recovery. The twelve step program is not necessarily one that members go through once and voila are magically healed. Many members of Cocaine Anonymous will make their way through the 12 steps of recovery multiple times during their treatment and healing process.

Is Cocaine Anonymous Right for Me?

A shortened overview of each of the twelve steps follows:

Some members of Cocaine Anonymous report breezing through certain steps and then becoming hung up on others. The twelve step program does not have a set timeframe for which the process is to be completed in or a set of norms for completion. For some, making the way through the twelve steps is relatively simple which for others it will take a great deal of reflection and self-evaluation in order to fully recover. This will ultimately depend on the individual and the severity of his or her addiction as well as his or her commitment to sobriety.

Find out how addiction treatment programs and Cocaine Anonymous can help you live a better life; call 800-736-5356(Who Answers?) today!