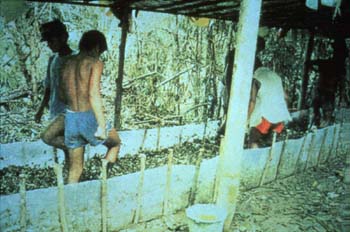 Cocaine is the world's most powerful stimulant of natural origin. South American Indians have used cocaine as it occurs in the leaves of Erythroxylon coca for at least 5000 years. Coca-chewing promotes clarity of mind and a positive mood. Traditionally, the leaves have been chewed for social, mystical, medicinal and religious purposes. Coca has even been used to provide a measure of time and distance. Native travellers sometimes described a journey in terms of the number of mouthfuls of coca typically chewed in making the trip. This was a "cocada" - the time or distance and man could walk before a coca pellet was exhausted.

Physical constraints ensure that even the most ardent coquero can get only a modest amount of cocaine into his bloodstream. Coca-induced heart-attacks and strokes are thus extremely rare among traditional users. In recent decades, however, there have been changes in cocaine's route of administration, patterns of usage, the technology of cocaine production, and typical dosages.

There are four basic routes to coca intoxication:

During crack-cocaine binges, addicts may become utterly drug-obsessed. The obsession is so all-consuming that food, money, sleep, loved ones, morality, any sense of responsibility, and even survival-instincts may be eclipsed. Users may smoke crack at fifteen-minute intervals for some 72 hours without pause for sleeping or eating. A "crash" inevitably follows; and a profound melancholy.

Thus crack-cocaine is neither a wise nor effective choice of long-term mood-brightener.