We all know that cocaine is a dangerous drug and we’ve all heard the stories about how cocaine ruins lives by ripping apart families and causing terrible addictions. People struggle with addictions to cocaine and other drugs every single day in the United States and across the world.

But did you know that when cocaine or other drugs are consumed in very large amounts that it can cause what is referred to as drug psychosis? I think nearly everyone remembers the infamous Tony Montana with cocaine smeared across his face confronting about a hundred men armed with machine guns. Tony, unfortunately, never had a chance to recover from cocaine psychosis.

Cocaine psychosis can cause visual and auditory hallucinations and can cause a complete manic episode during it’s effects. According to NIH, ” Paranoia occurs in 68% to 84% of patients using cocaine”. Studies also show that criminal related behavior increases with cocaine abuse including violent criminal attacks and even homicide.

Although nobody knows for sure what kind of drugs were involved, we have all heard the story about the man in south Florida who attacked a homeless man, stripped him naked and then proceeded to eat his face off. When police arrived they described the scene as horrific and some even believed that the attacker was under demonic possession.

This particular case was certainly one of the more gruesome cases of drug psychosis that has ever occurred and even more frightening were the interviews with the attackers family where they all gave glowing statements about the man and could not believe he had committed such a heinous crime.

His mother described him as one of the most gentle people she had ever known and that said he had never hurt anyone before and said despite problems with drugs, that he had always been the perfect son. Police officers were forced to shoot and kill the attacker to get close enough to the victim to save his life. 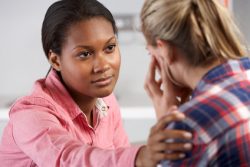 Counseling and medications can help you overcome psychosis symptoms caused by cocaine.

So what happens after cocaine psychosis occurs. Is there help available and can someone recover from a psychotic break if it happens to them? The answer may differ depending on the extent of the psychological damage that exists, but most can recover from cocaine psychosis with professional medical treatment. After the effects of cocaine wears off a complete psychological exam will be necessary to determine the amount of damage that might have been caused.

Medication can be given to ease anxiety and control hallucinations and even seizures that might be associated with cocaine psychosis. It’s effects can be residual and long lasting, requiring intense counseling and therapy to overcome. In most cases, people can overcome cocaine psychosis with proper professional treatment and will be able to return to their normal daily lives. Long term drug treatment would be recommended to avoid relapse of using cocaine again and causing another opportunity for cocaine psychosis to occur.