Are Cravings for Cocaine Treatable?

Cocaine withdrawal was once considered lesser than the other withdrawal syndromes, but now, it is widely understood that the drug has one of the more intense and longest withdrawal syndromes of any drug of abuse. One of the most difficult symptoms for users to cope with is the severe cravings for cocaine, which according to the US Department of Veteran Affairs, can occur months or even years after the individual’s last use of the drug, “such that objects and people in the addicted person’s life… become a conditioned trigger for craving and relapse.”

How Intense are These Cravings?

The cravings caused by cocaine abuse are incredibly severe at times, often more so than any other drug. As stated by the National Institute on Drug Abuse, “Recent studies have shown that during periods of abstinence, the memory of the cocaine experience or exposure to cues associated with drug use can trigger tremendous craving and relapse to drug use.”

Eventually, these cravings may start to come fewer and farther between, but whenever a person does experience them, they are usually extremely intense and difficult to fight. Because they are so strong and can continue for years after the individual’s last use, they often lead recovering addicts to relapse. However, there are some ways in which a person can be treated for these cravings. 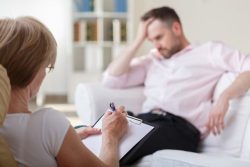 Though these cravings are severe, they can be treated in some ways, both professionally and through home remedies. The VA states, “Pharmacological intervention may be necessary during stimulant-induced drug states” as well as after the initial issues have subsided. “Anticraving agents with a fast onset of action may be helpful during the early withdrawal period,” but normally, these are not given during later withdrawals. Antidepressants may be taken during these late withdrawal periods, and sometimes, these can help with cravings as well as depressive symptoms.

Cravings can also be treated through intensive behavioral therapy. In cognitive-behavioral therapy sessions, for example, the counselor will help the patient envision a scenario where they may be tempted to use cocaine and then come up with a way of coping with this scenario or doing something to avoid relapsing back to the use of the drug. Triggers are also identified in therapy, so users can more easily evade them in their day-to-day life.