Cocaine is a dangerous narcotic that has no known medical use, although it was used in the early 1900s as an anesthetic. The bitter, addictive drug that is derived from the leaves of the cocoa plant is widely cultivated in Columbia and other areas of South America and then shipped through the United States as well as other areas of the world. This powerful stimulant can cause adverse reactions, increased tolerance and a wide range of problems for the user especially when the drug is abused for a prolonged period of time or when excessive amounts of the drug are used.

How Cocaine is Abused

Cocaine addiction doesn’t develop after just a single use of this powerful drug. It typically takes a user many times of using cocaine before he or she will develop a physical and psychological dependence that makes quitting a challenge. According to the National Institute on Drug Abuse, cocaine can be abused in a number of ways. The most common methods of use include:

According to the National Library of Medicine, many different signs and symptoms can become evident when a user is abusing cocaine. As the powerful drug is consistently abused, the user will show increased signs that there is a problem. Some of the most common signs of cocaine addiction are related to the attitude of the user and the extreme highs and lows that a user will experience when he or she is addicted to this drug. Other symptoms of cocaine addiction can become evident based on the method of cocaine abuse that is taking place. For instance, a user who is inhaling cocaine into the nose, or snorting the drug, may show the following signs of cocaine abuse and addiction:

Smoking crack, the hard form of cocaine, can lead to a wide range of addiction symptoms too. Many of the symptoms of crack cocaine addiction are slightly different than those experienced by users who inject or snort the drug. Some of the most common symptoms of smoking crack include:

Psychologically, cocaine has similar effects on the user no matter what method of use they take part in. Cocaine addiction can lead to a wide range of psychological problems for the user including: 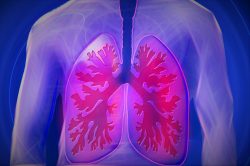 Cocaine addiction can cause lung damage.

Consistently using cocaine can lead to a wide range of long-term side effects that may make recovering from cocaine addiction very difficult. Not only can many of the health effects associated with cocaine addiction stick around for a long time even after the user has recovered, many of the problems tend to stick with the user for a lifetime making it always difficult to overcome and stop thinking about the addiction that once was.

Long-term health effects and consequences often arise as a result of cocaine addiction. Some of the most common include:

The most prevalent danger associated with cocaine addiction is related to the high risk of overdose and the potential for fatal consequences to occur. In addition to the risk of overdose, people who become addicted to cocaine have an increased risk of taking part in promiscuous or otherwise faulty behaviors that can lead to injury, illness or other serious hazards. People who consistently abuse cocaine are placing undue strain on their brains and their bodies. This can make recovery even more challenging as it will take longer for the user to heal and could take more time for the aftermath of the addiction to fully be eliminated from the daily routine of the addict.

If you suspect that someone you know may be suffering from cocaine addiction, the best thing that you can do is seek professional help. Cocaine addiction is dangerous, there is no known medical or safe level of use of this powerful stimulant and the risks associated with abusing cocaine over and over again increase with each time the user snorts, injects or smokes the drug. Professional treatment can provide the means for successful recovery, but only if the user seeks the help and takes the time to get well.

While it can be hard to overcome cocaine addiction on your own, recovery is possible. Many different methods of treatment exist to help people who are addicted to cocaine to overcome the burden of the addiction and get their lives back on track. Cocaine addiction treatment most often includes a range of therapeutic methodologies such as cognitive behavioral therapy, psychotherapy, counseling and support. There are no known medications that are guaranteed to help with cocaine addiction but research does suggest that in users who suffer from serious depression following an addiction to cocaine can benefit from taking certain antidepressant medications and some have greater chances of recovery when they use an anti anxiety medication in the early days of treatment when paranoia and anxiety are at a heightened point.

If you or someone you love is addicted to cocaine, get treatment help today by calling 800-736-5356(Who Answers?).