Cocaine abuse is a widespread problem in the United States. An estimated 2.1 million people in the country have abused the drug at least once in their lives and many use cocaine on a regular basis. As one of the oldest drugs known to man, cocaine has led the way in the stimulant world wreaking havoc on lives as it rips apart families, ruins individuals financially and creates serious legal problems for those involved. Unfortunately, cocaine abuse often leads to addiction that makes quitting even more difficult for the user and leaves the doors wide open to even more widespread problems.

For help ending your cocaine abuse, call 800-736-5356(Who Answers?) to speak with an addiction specialist.

What is Cocaine Abuse?

Cocaine abuse is not the same as addiction, but it can and will lead to addiction if it continues. Because there is no safe level of cocaine use that is considered acceptable, any use of cocaine is considered abusive. Whether you snort the drug occasionally, inject in regularly or you smoke crack for days at a time, these are all situations of cocaine abuse. According to the National Institute on Drug Abuse, using cocaine, regularly or not, can lead to serious consequences including physical or psychological dependence, overdose and even death.

How is Cocaine Abuse Different from Cocaine Addiction?

Cocaine abuse is the starting point when a user first starts to use cocaine. Cocaine abuse can continue for many weeks, months or even years without ever turning into cocaine addiction or it may only occur a few times before the user becomes physically or psychologically dependent on the drug. Unfortunately, cocaine abuse is the starting point and it does often lead to cocaine addiction which then requires professional treatment and support in order to quit.

A cocaine abuser will not crave the drug and will not feel any physical symptoms or psychological symptoms of withdrawal when the drug is not used. However, a cocaine addict will have significant cravings to use cocaine and often will feel a wide range of adverse side effects or withdrawal symptoms when they are not using the drug. This is the primary difference between cocaine abuse and addiction.

Various other differences may also exist in a user who takes cocaine. For someone who is not addicted to cocaine, the drug may be able to be used without a second thought about when it runs out or what will happen next. Likewise, when a user is addicted, he or she will do whatever it takes to have a consistent supply of the drug, to stay high and to remain in control of having enough cocaine to remain consistently under the influence.

If you suspect that someone you know or care about is abusing cocaine, paying close attention to the possible signs of cocaine abuse can help you to make the decision to confront the individual early on rather than to allow the cocaine abuse to spiral out of control and lead to addiction. Remember, seeking help early on can make a world of difference for the user and may prevent serious long-term side effects from occurring as a result of cocaine addiction. 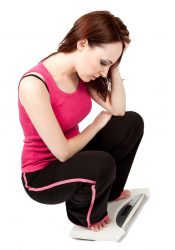 Weight loss is a common side effect of cocaine abuse.

Some of the signs of cocaine abuse that you should look out for include:

According to the National Library of Medicine, the biggest danger of cocaine abuse is the fact that continued use of cocaine can lead to dependence. Cocaine dependence often requires professional treatment and a wide range of behavioral therapies in order to help the user overcome the addiction. Cocaine abuse may go on for a short period of time or it may last for many months or years without ever causing any real problems for the user. Unfortunately, this isn’t always the case. In fact, some people become addicted to cocaine after a single use of the drug or after just a couple of uses of the drug.

A number of health effects can appear when a user is abusing cocaine. The most dangerous side effects of cocaine abuse is overdose and the potential for sudden death but next in line is addiction. The risk of cocaine addiction increases significantly with each time that the user abuses the drug. Nobody who abuses cocaine is safe from the potential of becoming physically or psychologically addicted to cocaine as a result of the drug use.

Cocaine abuse doesn’t require intensive treatment the way that cocaine addiction does but behavioral changes do have to be made in order for the user to learn how to avoid the drug and prevent themselves from becoming addicted. The most common method of treatment for cocaine abuse tends to involve support groups such as Cocaine Anonymous. These groups help people to understand why they abuse cocaine and they provide support to those who abuse the drug so that they are less likely to resort to drug use the next time they have a problem or are otherwise in a situation in which they would want to abuse cocaine.

Treatment for cocaine abuse can help to prevent further complications and addiction for occurring. If you happen to know someone who is abusing cocaine, or if you are abusing cocaine, the best time to seek professional help is now! The longer the cocaine abuse continues, the greater the chances will be that addiction will occur. While cocaine addiction is also treatable, users who seek help early on are more likely to recover with minimal risk of relapse than those who suffer the serious perils of cocaine addiction.

For help finding a cocaine abuse treatment program that fits your needs, call 800-736-5356(Who Answers?) for a toll-free consultation.