Is It Dangerous to Mix Cocaine and Alcohol?

According to the National Library of Medicine, “Cocaine is more dangerous when combined with other drugs or alcohol.” Unfortunately, though, people often participate in this practice of polydrug use; it can be extremely harmful and increase their chances of addiction. If you have been abusing cocaine and alcohol in any combination and need help now, call Cocaine.org at 800-736-5356(Who Answers?) immediately.

Polydrug Use and Addiction

Abusing two substances at once actually makes a person more likely to experience addiction and other psychological issues because the effects of the substances themselves become intensified and the individual craves them more after they begin to crash. Both alcohol and cocaine are addictive, and a person who abuses them together is likely to experience an addiction to either or both.

Many individuals who abuse cocaine especially enter treatment for polydrug addiction. This is because it is so common for users to take cocaine with another drug. Like in the situation of overdose, they do not realize that this use is intensifying both substances’ harmful effects, making the situation all the more dangerous for the individual. 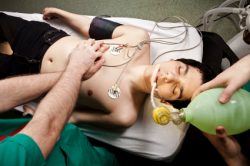 Abusing cocaine and alcohol at the same time increases one’s risk of overdose.

It is very common for those who abuse certain illicit substances to drink alcohol while doing so. This is often because alcohol is considered to be a less risky substance that can enhance another drug’s effects. Not only does alcohol consumption while using cocaine increase the harmful side effects of the latter drug, it also amplifies one’s likelihood of experiencing overdose.

As stated by the National Institute on Drug Abuse, “Greater risk of overdose and sudden death than from either drug alone” is the result when a cocaine user begins drinking simultaneously with their drug use. Cocaine abuse can cause stroke, heart attack, seizures, and coma when taken in high doses. Alcohol can cause respiratory depression to the point that an individual stops breathing. Many people believe these two substances cancel one another out, but the truth is a different story.

There are a number of signs that can help alert someone to the fact that they are about to overdose on either substance. However, the stimulant effects of cocaine and the depressant effects of alcohol do mask one another to the point where an individual may not realize how severe their situation is. This is one of the main reasons why the chance of sudden death grows exponentially when a person abuses both substances together.

Legally, alcohol can be used responsibly, but one’s use is no longer sensible when they begin taking cocaine in addition to it. Even if you are not an addict or you feel that your substance abuse is still under your control, it is important to examine it and to consider seeking treatment. You are putting yourself in danger every time you use these two harmful substances together, and it is important to stop early before addiction sets in.

However, if you are already experiencing an issue with addiction, treatment is also your best and safest option. Call 800-736-5356(Who Answers?) today to find a rehab center in your area and to learn more about how cocaine abuse can affect you.