Possibility of a Cocaine Vaccine?

Cocaine abuse and addiction effects the lives of millions of Americans every year.

Cocaine abuse and complications that come from it, is one of the leading causes of emergency room visits to hospitals in relation to drugs. Cocaine abuse is harmful to a person physically, mentally, and behaviorally. Cocaine abuse can impair a person’s brain chemistry and can permanently damage a person’s rewards system in the brain. This means that when they stop using the drug, they may have an extremely difficult time feeling happy again, or experiencing pleasure.

Physically cocaine abuse can lead to sudden death by causing a person to experience an unexpected heart attack or respiratory failure, no matter if it is the first time or the hundredth time a person has used cocaine. Cocaine addiction can lead to many people losing their financial stability in order to support their habit, and the more a person uses cocaine the more of it they will need to use and buy because they will keep on building a tolerance to the drug.

Cocaine addiction can be extremely difficult for a person to conquer on their own and many people who wish to stop using the drug need help in doing so. A cocaine vaccine can be a significant help with controlling cocaine usage and it may just be on its way to the medical field.

The Possibility of a Cocaine Vaccine 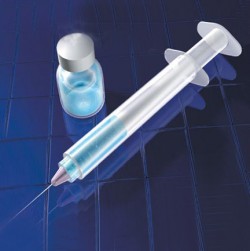 Researchers are working to create a vaccination for cocaine.

According to Medical News Today, there has been successful research for a vaccine for cocaine that has been proven effective on primates. The vaccine will completely stop the effects of cocaine from working in a person’s body. This vaccine eats up the cocaine in the blood stream making it so that the cocaine never reaches the brain and therefore does not have effect on the individual using the drug.

If this vaccine ever becomes part of the medical world it will help millions of people overcome their addictions to the drug, being that with the vaccine they will not be able to use the drug for its euphoric effects. Cocaine significantly impacts the chemical makeup of a person’s brain and with the vaccine a person will feel nothing when they use cocaine making the drug completely useless.