Powder cocaine has been around for centuries and is a stimulant drug that many people now abuse at parties or use recreationally for their enjoyment. Powder cocaine is typically snorted; however, it can be mixed with water and injected into a person’s veins.

Powder cocaine is a lethal drug that many people abuse without realizing the consequences that can occur from their abuse. Powder cocaine is one of the most prominent illegal drugs sold on the streets and can be an expensive habit for people to support. If a person is caught buying or selling powder cocaine they will be charged with a criminal offense and can serve time in jail.

Powder cocaine affects a person’s reward system in their brain causing them to feel euphoria and a surplus of energy. This feeling is short lived but, when the drug is out of a person’s system they will feel fatigued and less energized than normal. A person will also feel less happy when the cocaine has left their body due to the depletion of serotonin that occurs when cocaine leaves a person’s system.

Powder cocaine can cause numerous health problems to occur in a person when they are taking the drug and when the drug leaves their system. According to the Foundation for a Drug-Free World, in 2005 there were 448,481 emergency room visits due to cocaine abuse and in America cocaine is the most frequently mentioned drug for emergency room visits. 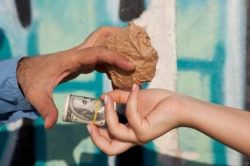 Cocaine typically comes in powder form and is referred to by many different names.

Powdered cocaine has been around for many years and there have been thousands of different names the drug has been called. Some drug dealers make up their own code word for the drug so that only the people they are selling to know what they are talking about.

The street names of cocaine are constantly changing and some drug dealers just call their product the name of a person, or label them a certain sex such as boy or girl when they are talking to buyers.