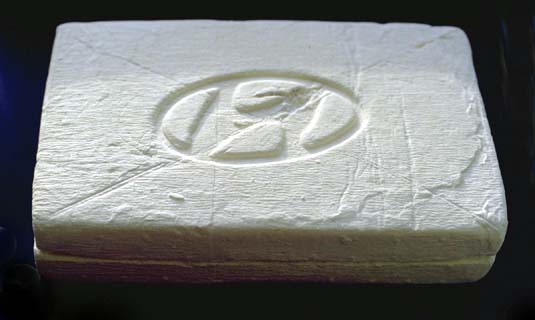 Cocaine is an integral part of the world economy. Its street price reflects the competitive pressures of today's global marketplace. In the past few decades, cocaine has become a significant export-earner for many poor South American countries, notably Peru, Bolivia and Colombia. South America currently exports some 1000 tons of refined cocaine per year. Smugglers can be quite ingenious. In recent years, US federal narcotics officials have seized $450,000 worth of cocaine moulded into dog kennels; and detained a consignment of sickly boa constrictors stuffed with cocaine-filled condoms.

Cocaine is now a leading export earner for Jamaica. Phil Sinkinson, Britain's deputy high commissioner to the island, was asked (2nd Jan 2002) on BBC Radio 4 Today programme to comment on newspaper claims that one in every ten air passengers travelling from Jamaica to the UK was a cocaine carrier or "drug mule". He replied: "Probably an estimate on the low side."

In the twentieth century, coca was grown commercially in Sri Lanka, Taiwan, Indonesia, Nigeria, Malaysia and Japan. The first cocaine cartel was formed, not in Colombia, but in Amsterdam. Founded in 1910, the Cocaine Manufacturers Syndicate included pharmaceutical giants Merck, Sandoz and Hoffman-LaRoche. At present, however, most production occurs in clandestine laboratories in South America.

The cocaine trade continues to spawn eyebrow-raising alliances. Declassified documents now available at the CIA web site disclose that in the 1980s CIA operatives teamed up with cocaine dealers in the fight against Communism.

In 1979, the people of the small Central American country of Nicaragua overthrew the US-backed Samoza dictatorship. To the dismay of US policy-makers, the Nicaraguans then elected a left-wing government. Investigative journalist Gary Webb [Dark Alliance: the CIA, the Contras, and the Crack Cocaine Explosion; June 1998] first revealed how profits from cocaine sold in Los Angeles and Miami were used by the CIA to fund - and buy guns for - the anti-Communist Contra rebels. Suitcases stuffed with coke-tainted US dollars were dispatched to Nicaragua to foment insurrection and civil war.

According to Internic records (1998), contact details for the domain cocaine.com still belonged to the CIA, although the accuracy of the whois record has been challenged.