When a friend or a loved one starts acting strange, it is difficult to think they might be abusing cocaine. According to the National Institute on Drug Abuse, 13 to 15 percent of American’s have tried cocaine. Of those, up to 6 percent tried it while still in high school. Unfortunately, in today’s culture recognizing potential cocaine use symptoms is necessary.

Cocaine use changes a person’s appearance over time. Some of these changes are as simple as dilated pupils and a red runny nose but other changes hint at more problematic changes. Some cocaine users pick at their skin; this creates sores that may become infected. In addition, friends and family may see tract marks from injecting or sores on the lips from pipe burns.

Weight loss is another significant sign of cocaine use. When someone is using his or her energy increases and the appetite decreases. This causes unhealthy weight loss. Many habitual cocaine users look emaciated or malnourished. This is distinguishable from normal healthy weight loss by the lack of muscle and unhealthy appearance of the skin.

It might seem strange to say but many users use the bathroom frequently to get high. The cocaine euphoria lasts only 30 minutes at a maximum so there is a frequent need to get high. They also might stop using the bathroom to shower or bath. Since the need for the drug is so powerful, cocaine addicts will neglect their appearance in favor of remaining high on the drug.

Cocaine causes the dopamine receptors in the brain to become excited, which produces a pleasure response. These receptors become overused and may burn out. This causes the user to become depressed and not find anything pleasurable. Activities that used to excite the user do not anymore. They may seem bored or unresponsive where they previously enjoyed an activity.

Cocaine is a stimulant. When someone is actively using cocaine they do not sleep or do not sleep well. One sign of cocaine withdrawal is irregular or disturbed sleeping patterns. They might also suffer from severe or unpleasant dreams.

One of the classic cocaine use symptoms is extreme euphoria or joy with no apparent reason. This euphoric feeling is why people use cocaine. A user might be morose, then after a trip to somewhere private come back in a happy or joyful mood for no reason.

Another sign of being high on cocaine is extreme amounts of energy. They might seem agitated and almost manic in the amount of energy they have. Someone who is coming down from a cocaine high will seem extremely tired and worn out. They may complain of being tired despite having just slept. 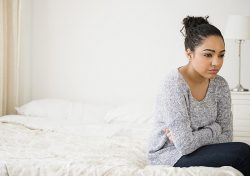 Cocaine use can cause mood swings.

Someone on cocaine will seem happy and excited while someone addicted to cocaine will have lightning fast mood changes. They may be happy one minute and angry the next. The range of moods and the quick changes can be frightening. According to the National Library of Medicine, someone in cocaine withdrawal may suffer from extreme depression or paranoia.

When a person is using any drug, they tend to gravitate to other drug users. Due to mood changes and other addict behavior users, tend to lose the friends that refuse to do drugs. Losing friends and gaining new ones particularly ones that are users or dealers is a very good sign that someone is using cocaine.

Most illegal drugs are expensive. Cocaine is one of the most expensive drugs on the black market. A user might ask to borrow money, lose their job, or not be able to pay their bills. Although financial problems may indicate other things, when someone has income but never seems to have money or purchase things it is a good sign they are on some form of drug.

Drug paraphernalia is a very good sign someone is using drugs. The things associated with cocaine use are:

Although it is not exclusive to cocaine use, frequently changing jobs is a good sign that something is going on. People who use cocaine are late to work, absent from work, or get dismissed a lot. As the addiction cycle continues, they might not be able to keep a job for more than a few weeks or months.

People who use cocaine tend to become extremely anxious and paranoid. They might accuse others of trying to get them or that others are turning against them. They might even accuse close friends and family who approach them about their drug use.

The need for cocaine particularly crack cocaine becomes an obsession. Many users are obsessed with where they are going to get their next hit. When actually high on cocaine they might practice obsessive cleaning, working, and other like behaviors.

People who use cocaine for a long time tend to have several physical health problems particularly heart and stomach issues. They might have poor digestion, chest pain, or heart palpitations. They might complain of feeling sick or that their heart is going too fast.

Although no one sign is a definitive symptom of cocaine use, when taken together there is usually a problem. When someone shows more than a few of these cocaine use symptoms, chances are they are on or have used cocaine. If you suspect a friend or loved one is on cocaine, it might be time to speak with them about it.