Physical Side Effects of Cocaine Addiction

Cocaine has a number of psychological side effects, some of them being dangerous and uncomfortable while some of them are actually the reason people abuse the drug in the first place. But once a person becomes addicted to cocaine, the drug can cause a number of intense physical side effects as well, which can be extremely dangerous to the individual and lead to irreparable damage, hospitalization, and even death.

Methods of Administration and Their Effects

According to the National Institute on Drug Abuse, “Different routes of cocaine administration can produce different adverse effects.” A person who normally snorts cocaine, especially after addiction has set in, may experience frequent nosebleeds, problems swallowing, hoarseness of the throat, and irritation of the nasal septum. The individual might even experience a chronically inflamed nose that is constantly runny. In addition, they may also even lose their sense of smell completely. But someone who does not snort cocaine usually won’t experience these effects.

Instead, an individual who prefers to inject cocaine will often have track marks on their arms as well as frequent allergic reactions. These could either be “to the drug or to some additive in street cocaine, which in severe cases can result in death.” Those who ingest the drug are likely to experience several gastrointestinal problems, the most severe of which is bowel gangrene caused by a reduction in blood flow.

As stated by the Drug Enforcement Administration, “Overdose effects include agitation, increased body temperature, hallucinations, convulsions, and possible death.” When a person overdoses on cocaine, they could suffer a heart attack or a stroke because of the strain the drug puts on the individual’s organs. According to the NIDA, “Cocaine-related deaths are often a result of the heart stopping (cardiac arrest) followed by an arrest of breathing.”

Other Physical Side Effects of Cocaine Addiction 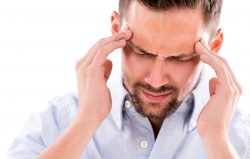 Cocaine addiction can cause headaches, insomnia, seizures, and many other problems.

Cocaine addiction causes many issues, most of them psychological, but a person who becomes addicted to the drug is likely to experience severe physical problems as well. Some of the other common physical side effects associated with cocaine abuse include:

It can take a long time to alter these effects and to help the individual feel better again, even for them to begin to look like themselves again. It is so important to understand the danger of not only cocaine’s psychological effects but also its physical effects and how both only intensify when the individual becomes an addict.

Do You Have a Loved One Who’s Addicted to Cocaine?

Or have you been abusing the drug in the long term? Most cocaine-related deaths are associated with the physical side effects of the drug, which only worsen with prolonged use. Call 800-736-5356(Who Answers?) today to get help.