How are the Withdrawal Symptoms of Cocaine Abuse Treated?

Cocaine withdrawal is one of the more difficult withdrawal syndromes to endure. According to the National Library of Medicine, “When cocaine use is stopped or when a binge ends, a crash follows almost immediately,” causing severe cravings, fatigue, lack of pleasure, sleepiness, increase in appetite, irritability, anxiety, agitation, and sometimes even suspicion and paranoia. As time goes on, however, cravings can linger and depression will begin to set in. Both of these issues can last years after a person’s last use of the drug. But how are the withdrawal symptoms of cocaine abuse treated?

These early symptoms can include those listed above as well as a possible psychosis that can be caused with severe cocaine abuse and linger into early withdrawal. This latter issue can often be treated with neuroleptics (or anti-psychotic medications). However, the individual will need 24-hour care during this time, as the tendency to hurt one’s self or someone else during this stage is high.

The NLM states, “People who have cocaine withdrawal will often use alcohol, sedatives, hypnotics, or anti-anxiety medicines to treat their symptoms.” While these are not meant to be taken without a doctor’s permission and while they can be dangerous if taken in the long term, “under proper medical supervision… short-term use of these medicines may be helpful in recovery.”

If they are able to, patients may also want to consider attending therapy during this time to help with the psychological symptoms of their withdrawal. They will likely already need to do so as part of their addiction treatment, and both issues can be treated together. Over the next few weeks, though, the individual will likely begin to experience a minimization of the early symptoms and begin to feel more like themselves. 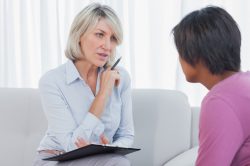 Depression is one of the most intense symptoms of cocaine withdrawal, and its results can be dangerous if it is not monitored and treated. Depression can also last the entirety of a person’s withdrawal syndrome, creating a number of issues. Like normal depressive symptoms, these can be treated with behavioral therapy, along with one’s addiction to cocaine. Behavioral therapy can help the individual visualize scenarios in which they may be asked to create a solution that does not involve them abusing cocaine, and it teaches the patient a new way to see themselves and their drug use.

According to the US Department of Veteran Affairs, “During the late withdrawal phase… antidepressants may be an appropriate choice for treatment.” These can be used to help minimize depressive symptoms and protect the individual from any dangerous outcomes.

Cravings are often treated with anticraving agents in the beginning of withdrawal and with behavioral therapy later in treatment. There is a strong likelihood that the individual will still experience sudden cravings late into their withdrawal phase and even years after they last abused the drug, and behavioral therapy can help prepare them to deal with this issue by helping them identify and avoid triggers and learn better ways to cope with this issue.

Are you experiencing cocaine withdrawal, or do you believe you will? Call 800-736-5356(Who Answers?). We can help you find treatment that will work for you.