Which Cocaine Withdrawal Symptoms Take the Longest to Treat?

Some cocaine withdrawal symptoms will subside over the first week or so after a person stops abusing the drug. Other symptoms, however, can take a long time to treat, and even when they begin to subside, they can resurface suddenly much later. According to the National Library of Medicine, “The level of craving, irritability, delayed depression, and other symptoms produced by cocaine withdrawal is as strong as other types of withdrawal, or even stronger,” and these issues can also take a very long time to treat.

Cravings start to occur during the initial crash period of cocaine abuse, which usually happens hours after the last use of the drug wears off. According to the US Department of Veteran Affairs, this period is “characterized by symptoms of depression, anxiety, agitation, and intense drug craving.” However, as many of these symptoms begin to subside, cravings for the drug will ebb and flow, coming in and out in varying levels of intensity over long periods of time.

Unfortunately, months or even years after the individual’s last use of cocaine, they may still be blindsided by severe cravings that are brought on by a trigger of some kind, often an object or person tied with the individual’s former drug use.

In order to respond to this in a way that is safe and beneficial to the individual––and does not lead to relapse––the person will often need long-term behavioral therapy. Still, these cravings can resurface at any time, so treatment for this symptom is almost always relevant, and individuals must watch what they eat and use in terms of substances that create effects at all similar to cocaine use. 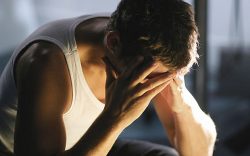 Depression is a common cocaine withdrawal symptom that can be treated with behavioral therapy and medication.

Depression is another symptom that can last a very long time, causing an individual to require long-term treatment that goes beyond the normal withdrawal treatment program lengths. Many individuals require behavioral therapy that lasts months for them to learn to control and manage their depression, and in some cases, the individual may need to be put on antidepressants for a specific period of time to combat this symptom.

Another reason why treatment must last a long time and relapse should be avoided as long as necessary is because irritability can also linger long past the other withdrawal symptoms have subsided. A person may require behavioral therapy for this symptom as well, and they must learn to manage feelings of irritability in order to avoid the issues it can cause in their daily life.

Not all symptoms last as long as those listed above, but several of the effects caused by cocaine withdrawal require treatment in the long term and an intense program at that. It is important that treatment lasts as long as the individual is able to benefit from it, and in the case of these three symptoms especially, an individual may require some of the longest treatment available.

If you would like to find a treatment program for cocaine abuse, addiction, and withdrawal in your area, call 800-736-5356(Who Answers?). We can help you find a facility that caters to your needs, as well as answer any questions you may have about cocaine abuse and addiction.