How Long Does Cocaine Stay in Your System?

Compared to other drugs of abuse, cocaine produces some of the most powerful effects in terms of the impact it has on the body’s system. Anyone who’s used this drug well knows how intense a cocaine “high” can be. This effect mirrors the drastic changes taking place within the body.

When all is said and done, cocaine’s time in your system doesn’t even begin to reflect the degree of havoc and damage it wreaks in terms of your physical and psychological well-being.

When smoked, snorted or injected, cocaine enters into the bloodstream at varying rates. Once inside the blood stream, peak levels or peak effects occur in about 30 minutes. From there, the drug is widely distributed through the body’s tissues as well as the interactions had within the brain’s chemical system.

According to the National Institute on Drug Abuse, an estimated one to five percent of cocaine materials pass through urine, unchanged. The body also produces metabolite byproducts during the metabolism process.

Overall, how long does cocaine stay in your system varies depending on route of administration, dosage amount and how long a person has used the drug.

How Long Does Cocaine Stay in Your System? – Determining Factors 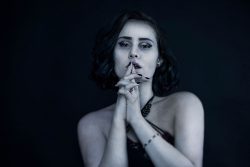 Cocaine takes longer to leave your system if you’re a long-term user.

Different routes of administration (smoking, snorting, injecting) influence how long cocaine stays in your system due to differences in absorption rates into the bloodstream. In effect, the faster a person experiences a “high” effect, the quicker the absorption process, though the drug’s “high” effect will also be shorter in duration as a result.

Routes of administration also determines cocaine’s half-life time in terms of how long it takes before half of the amount ingested leaves the system. According to the National Highway Traffic Safety Administration, cocaine tends to have a short half-life that averages around one hour.

7 Signs Your Cocaine Abuse is Out of Your Control

For people who’ve used cocaine on a long-term basis, the drug’s distribution throughout the body’s tissues accumulates over time. As a result, it takes the body longer to fully excrete cocaine residues as tissue materials must release these residues back into the bloodstream. This process tends to take longer when accumulations are present.

Most drug testing tools used to detect cocaine look for a specific metabolite known as benzoylecgonine. Whereas cocaine materials move the body’s system fairly quickly, benzoylecgonine markers can remain in the system for up to six times longer than cocaine. In this respect, how long does cocaine stay in your system varies considerably when drug testing is involved.

If you or someone you know are considering getting help for a cocaine abuse problem and need help finding treatment that meets your needs, please feel free to call our toll-free helpline at 800-736-5356(Who Answers?) to speak with one of our addiction specialists.