How Cocaine Affects Your Mood

Many individuals begin abusing cocaine to experience the effects the drug specifically causes on their mood and behavior. Some want to perform a task more quickly while others may want to feel more energetic for a party; unfortunately, cocaine has a series of dangerous side effects, even during short-term abuse, and some of these even include the ways in which the drug affects a person’s mood. Therefore, it is important to understand the full consequences of cocaine abuse, especially those that can affect your state of mind for the worse.

According to the National Highway Traffic Safety Administration, “Recreationally, cocaine is used to increase alertness, relieve fatigue, feel stronger and more decisive, and… for its intense euphoric effects.” Most individuals take the drug expecting to feel strong, confident, and alert, which often occurs once the drug initially kicks in. Euphoric effects are usually caused when a large enough dosage is taken, and like most stimulants, the high is intense, causing the user to be in a blissful state where they believe they can do anything.

However, most people who abuse cocaine––whether they snort it, inject it, or smoke it in its crack form––focus so heavily on these side effects that they do not consider the serious mood changes they will be likely to undergo soon after they begin to abuse the drug. 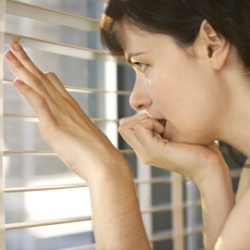 Cocaine can make you feel paranoid.

It is common for users to very suddenly feel their moods shift after abusing cocaine, often in a more dangerous direction. For example, many people begin to feel paranoid, anxious, or restless, sometimes simultaneously with their cocaine high. This can be very confusing and feel like the equivalent of experiencing two or more moods at once. When a person becomes extremely anxious or paranoid after abusing cocaine, their chances of exhibiting violent or dangerous behavior increase greatly as well. Full-blown panic can even occur when a person has become seriously, negatively affected by their cocaine high.

In addition, users are more likely to engage in dangerous or risky behavior when they are high on cocaine. This is because of the mood changes the drug has caused and their lowered inhibitions. The chance of someone contracting an STI or another type of transmittable disease increases greatly when they are on a cocaine high. The withdrawal syndrome for cocaine is heavily steeped in mood and psychological reactions as well, its symptoms including “depression, irritability, extreme fatigue, anxiety, and an intense craving for the drug” that trumps all other feelings (Center for Substance Abuse Research).

Those who continue to abuse cocaine are only likely to experience more severe mood problems, including possible mood disorders and disturbances, psychosis, delusions, violent outbursts, and long-term irritability. Cocaine abuse will change the way your moods work, often only becoming worse the more you continue to abuse the drug.

Want to Learn More About the Effects of Cocaine?

Call 800-736-5356(Who Answers?) today to find out more about how cocaine abuse can affect your moods and your life. We can also help you find a rehab program where you can receive the best treatment possible for your substance abuse disorder.