A cocaine overdose can occur in one of several ways, according to the National Library of Medicine: by an individual abusing too much of the drug, using the drug when the weather is hot, “which leads to more harm and side effects because of dehydration,” using the drug with other substances that intensify its effects, or by swallowing a pack of cocaine in order to transport the drug. However it occurs, an individual who has overdosed on cocaine needs to be brought to the hospital immediately. Then, the doctors in the ED can treat them for cocaine overdose.

“The health care provider will measure and monitor the person’s vital signs, including temperature, pulse, breathing rate, and blood pressure.” All of these must be monitored and kept in check to avoid dangerous or deadly side effects from occurring. The individual may also be given a number of tests including:

These tests can help the health care providers determine more accurately how severe the individual’s condition is and whether or not they will require more intensive treatment. It can also help the doctors determine how much of the drug is in the person’s system and if they have other dangerous substances in them as well.

The individual may have trouble breathing as a result of their severe intoxication from cocaine. Breathing support, “including oxygen, a tube down the throat, and ventilator” may be necessary for the individual’s health. If the individual’s breathing becomes labored or stops altogether, the doctors in the ED will need to support it manually. 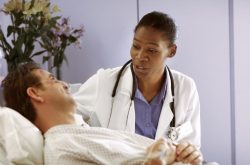 Doctors may administer medications for nausea and pain.

Often, the doctors will need to administer certain medications in order to manage the individual’s symptoms. CNS and cardiovascular effects can both be treated using benzodiazepines, but it will depend on the severity of the individual’s condition whether or not these medications are necessary. These drugs can also treat seizures and severe anxiety. Medication to treat nausea and pain may also be beneficial for these individuals.

The patient may also need to be given fluids through an IV to minimize the chance of dehydration. While medications usually aren’t given to reduce an individual’s temperature, hyperthermia may be treated by using convection cooling (which utilizes the spraying of lukewarm water onto the individual as fans blow on them).

Treating Cocaine Overdose in the ED––And Beyond

The individual will require constant monitoring, usually anywhere from 24 to 36 hours in order to ensure that they will become stable after their overdose. Once they are, the ED doctors will usually recommend that the individual attend addiction treatment. This is because overdose is often a sign of uncontrolled abuse, and those who are taking enough cocaine to create an overdose situation ought to seek treatment right away.

Cocaine overdose is treated with careful monitoring and the handling of any symptoms that appear. If you believe you may be in danger of experiencing an overdose, it is important to call 911 right away. To find treatment centers in your area or to learn more about cocaine overdose and its consequences, call 800-736-5356(Who Answers?) today.