Overdose is one of the most dangerous consequences of cocaine abuse. According to the Drug Enforcement Administration, “Overdose effects include agitation, increased body temperature, hallucinations, convulsions and possible death.” Surprisingly, though, the treatment itself is not dangerous nor is it usually painful, as most patients are either sedated or unconscious.

How is Cocaine Overdose Treated?

Cocaine overdose must be treated in a hospital. If you begin to notice the symptoms of this condition in yourself or a loved one, call 911 immediately, as it is important to receive treatment as soon as possible. Because death is a possibility, the individual must be brought to the hospital immediately.

The medical professionals treating your overdose will look at it as a poisoning, which means they will take each symptom individually and attempt to treat it. This is because, unfortunately, there is no antidote for cocaine like there is for opioid overdose. Different symptoms are treated in different ways, from immersion in ice water for a dangerously high fever to sodium bicarbonate being given for a rapid heartbeat. Normally, a saline solution is given when signs of dehydration are present, and defibrillators are used if the heartbeat suddenly stops.

Are These Treatments Dangerous? 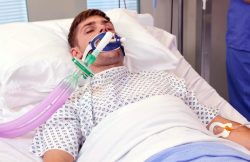 Cocaine overdose requires hospitalization due to the risk of death.

In most cases, those who are taken to the hospital in time to be treated for cocaine overdose are able to leave the hospital within a few days. These treatments are often effective at clearing the symptoms of overdose and allowing the individual to safely recover. However, the symptoms themselves can be highly dangerous, which is why speed is of the essence when getting the individual into treatment.

According to the Better Health Channel, “The consequences of overdose include seizures, brain hemorrhage, kidney failure, heart attack or stroke.” It is important for medical professionals to try and avoid any of these results as much as possible, but sometimes, a person will still experience serious consequences of their overdose. Still, the treatments themselves are not dangerous.

Normally, someone who has overdosed on a drug like cocaine must be considered for the presence of addiction and the need for addiction treatment. If this is not performed, it can be very dangerous for the individual, as they could overdose again soon after. Therefore, most hospitals recommend individuals who have overdosed on cocaine––especially those with long-term abuse problems––seek addiction treatment to prevent the reoccurrence of further abuse and any other issues.

Cocaine is a dangerous drug, and while it may not be painful to undergo treatment for overdose, the experience itself can be very frightening and the symptoms caused by the high level of abuse can be serious. Those who wish to avoid this type of issue before it occurs can attend addiction treatment immediately so as not to get to the hazardous point of taking too much. If you are looking for safe addiction treatment near you or you want to discuss the effects of cocaine and overdose, call 800-736-5356(Who Answers?).

Where to Find Cocaine Overdose Treatment