What is Cocaine Made Of?

Cocaine is made of the leaves from the coca plant. Technically cocaine is the alkaloid found inside the leaves. Although there are 200 varieties of this plant, only two of them contain enough cocaine for refining. These two types are found in the mountains of South and Central America. This alkaloid is a very powerful stimulant and people used it for centuries before it became a popular high-end drug.

Unfortunately, due to its illegal nature, no one knows much about the actual cocaine plant. United States scientists often resort to studying other plants and making assumptions about cocaine. When considering what cocaine is made out of, you also have to consider how it is made, why people use it, and what the problems with cocaine are.

How is Cocaine Made?

According to National Geographic’s article, “Secrets of Natural Cocaine Production Revealed,” people started cultivating cocaine about 8,000 years ago. At first, the indigenous people of South America chewed the raw leaf for religious and spiritual purposes. They were also chewed for energy and as a pain reliever while people worked in fields and farming.

It was not until later that the indigenous people started to strip the leaves and dry them for easier consumption. From here, it is a delicate process. If the dried leaves get wet at any time, they can start to rot. This makes them useless to those manufacturing drugs out of them.

These processing techniques vary slightly depending on the manufacturer. Manufacturers normally process cocaine in small batches so it is easy to make changes.

What Else is in Cocaine? 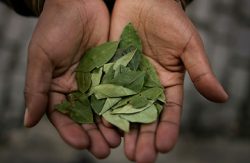 The main ingredient in cocaine is leaves from the coca plant.

Once cocaine is processed it stops being pure. Left over solvents, alcohols, and other substances remain in the drug. By using different substances to dry and process the cocaine the purity of the cocaine changes. The exact effect of these substances on cocaine is yet unknown but researchers are studying it. Some of these are:

Each of these can leave residue in the cocaine during processing.

There are illegal and legal versions of synthetic cocaine. These are made with a variety of amino acids and alcohols. Most of the synthetic cocaine formulas are kept under wraps due to copyright and patents.

Many things cause cocaine to be impure. Most of these are either solvents and acids left over from processing and what drug dealers use to cut down the purity. People who sell cocaine usually add something to thin out the product. They increase its volume to increase the money that they make off a batch of the drug.

Some of the things that they cut cocaine with are:

Although most of these are not typically harmful, they can produce some unwanted reactions in those that are allergic.

The addition of other substances in cocaine often changes the type of cocaine. The types of cocaine are:

Most types of cocaine start with the original coca leaf and have things added from there.

When wondering what cocaine is made of, it is important to remember that all drugs have other things added into them. The manufacturing process does not normally change the composition of the drug, it is what is added later to maximize drug dealer profits. Although some dealers act responsibly, others do not. These substances range from relatively benign to extremely dangerous. Some will even mix the cocaine with other drugs to increase the high or add to the addiction.