Cocaine was once sold as the wonder drug, that would cure almost any ailment and would treat pain like no other drug on the market. Many years ago, in the days of Sigmund Freud and the pioneering surgeon William Halsted, is when the history of cocaine really sets its roots. According to long time studies and history, cocaine was once enjoyed even by royals such as Queen Victoria and Pope Leo XIII. It was not until much, much later in time that cocaine was found to be a powerful stimulant that actually had inherent dangers such as the potential for abuse, addiction and serious side effects.

The History of Cocaine Dates Back Thousands of Years

Back as far as 3000 BC, cocaine was used by the ancient Incas in the Andres as a way to speed the breathing to counter the effects that they felt from living high upon the mountains. Since mountain air is thicker and tends to slow the breathing process, the Incas would chew on the coca leaves which would result in a stimulant effect that would cause their breathing to rapidly speed up.

Even in Peru in the 1500s, cocaine was used during religious ceremonies. The Native Peruvians would chew the leaves of the coca plant during religious ceremonies to produce a stimulant effect that often included hallucinations both auditory and visual. This method of cocaine use was stopped when Spanish soldiers invaded the area. During this same time, Indian laborers who worked in the early Spanish silver mines were given the leaves of the coca to chew. The Spanish settlers believed that this made the Indians easier to control.

The drug was not formally isolated from the coca leaves until the mid-1800s. It was in 1859 when German chemist Albert Niemann first extracted the cocaine, the actual drug, from the coca leaves. No known medical use existed for the drug still for many years, at least not until the mid-1880s. It was around 1884 when Sigmund Freud, the Austrian psychoanalyst who developed the Freudian thinking model actually used the drug himself and realized the ability for cocaine to “cure depression and sexual impotence.”

From that time on, the history of cocaine really started to develop as Freud published an article which proclaimed cocaine as the “magical substance” that could be accepted for a wide range of benefits including its ability to reduce many ailments and cure various problems. Unfortunately, Freud was not an objective cocaine advocate. He was very heavily entangled in cocaine use, prescribed it to his friends and lovers and widely recommended it for uses other than for medical purposes. He was essentially an addict, though nobody would have known at the time because there was no known ability for cocaine to cause tolerance of addiction as of that point in the history of cocaine.

One of Sigmund Freud’s friends, whom he had recommended cocaine to, actually suffered psychosis as a result of abusing the drug. The many noted a number of paranoid delusions and hallucinations including the presence of “white snakes all over the skin.” Still so, at this point in history there were no known dangers of cocaine abuse though Freud did eventually deem that the toxic level of cocaine abuse for a human was there, it was just “very high.” 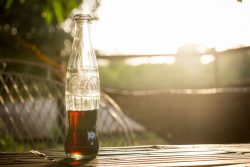 Ever wonder where the name Coca-Cola came from? The maker of Coca-Cola, John Pemberton, actually used the coca leaves as an ingredient in his cola drink in the 1880’s. Coca-Cola then became widely known as a cola that would produce euphoric effects and increased energy. This was a direct result of the stimulant effects that the cocaine had on the user. As a result, though people didn’t even realize that cocaine was bad at the time, the Coca-Cola became a very widely consumed soft drink that would continue to be very popular through the turn of the century.

As the history of cocaine continued to progress and more and more people, including social elites in Hollywood as well as millions of others continued to use the drug, dangers began to become more prominent and noticeable. Unfortunately, it took many years before cocaine abuse was finally considered dangerous and potentially lethal to the user.

By the early 1900s, cocaine use was a very widespread problem. During this time, the US Government reported as many as 5,000 cocaine related deaths each year. As the drug continued to pose serious problems for those who abused it, laws were put into place to make the use of cocaine illegal. By 1922, cocaine was no longer legal, it had been removed from the recipe in Coca-Cola as of 1903, and the use of the drug would gradually taper off with some time.

Another Rise in Cocaine Use

Unfortunately, cocaine abuse wouldn’t remain an afterthought in American history for long. By the 1970s, cocaine would start to emerge once again as a fun, fashionable way to get high and stay “awake and alert.” The drug was widely used by entertainers, business professionals and elites in an effort to increase focus, increase energy and provide a stimulant effect. The drug use would continue heavily through the 80s and into the 90s.

According to the National Institute on Drug Abuse, although cocaine is now known to be highly addictive, highly dangerous and in no way safe to abuse, the drug continues to be widely used by both the rich and the poor. Cocaine abuse and addiction became some what of an epidemic, effecting users young and old, rich and poor, educated and not. Cartels traffic the drug, hundreds of tons at a time, into the US to be shipped throughout the country and over to Europe and Asia. These cartels have caused serious problems for the United States, frequently resulting in serious bloodshed and widespread hazards for those directly and indirectly involved with the drug use.

The war on drugs has been a huge factor in everyday living throughout the 1990s and into the 2000s. Today, as the history of cocaine has progressed more than 5000 years, there hundreds of known drug trafficking organizations who smuggle the cocaine from Columbia into the states with the intention of selling the powerful stimulant on the streets to unsuspecting users.

If you or someone you love abuses cocaine, call our toll-free helpline at 800-736-5356(Who Answers?) to find an appropriate treatment program.