Cocaine overdose is the result of taking a toxic amount of cocaine either via injection, by smoking it, eating it or inhaling it into the nose. Regardless of how cocaine is used, the risk of overdose is always prevalent because the drug cannot be measured in terms of quality before being used. As a result, a user may think that he or she can use a larger amount of the drug due to poor quality in past scenarios and could very easily overdose if the quality of the drug that they use were improved.

People who overdose on cocaine may require immediate medical treatment in order to stop the effects of the cocaine from causing serious damage to the heart, liver, kidneys or other organs. When left untreated, cocaine overdose has the potential to cause fatal side-effects including heart attack, stroke or other serious health complications.

To learn more about cocaine overdose, or for help finding an addiction treatment program, call us toll-free at 800-736-5356(Who Answers?).

Unlike other drugs in which a toxic amount is quickly consumed, most of the time, cocaine overdose is the result of using a toxic amount of the drug simply because the user is unaware of the potency of the drug. Using cocaine causes tachyarrhythmia and other serious heart elevation problems which can lead to sudden death. The elevated blood pressure that occurs as a result of using cocaine can quickly spiral out of control causing serious side-effects. Cocaine overdose is a life-threatening condition that can easily be misunderstood.

How Much Cocaine Does it Take? 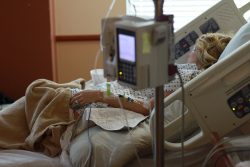 An overdose on cocaine usually requires medical attention and can cause fatal health issues.

So how much cocaine is too much cocaine? Overdose can occur after a single dose of cocaine or it may take a very large amount of the drug to induce toxic effects. According to the National Institute on Drug Abuse, for some, just a small amount of cocaine is enough to cause serious side-effects such as heart arrhythmia, elevated blood pressure or sudden death. For some people though, the amount of cocaine that it takes to produce an overdose effect is much higher. In fact, some can use cocaine repeatedly over-and-over again before they will actually experience serious side-effects.

The problem with determining how much cocaine it will take to produce an overdose effect is that some cocaine is simply more potent than other cocaine. It’s impossible to tell how potent the drug is until the drug is being used and in some cases, by the time the drug is being used it’s already too late. Because of the ability for cocaine to be so varied in potency, this drug is considered highly dangerous and should not be abused.

What are the Signs of Cocaine Overdose?

It’s important to immediately seek medical treatment if you suffer any of the following effects of cocaine overdose after using even a small amount of this drug:

Cocaine overdose, when left untreated, can lead to stroke, respiratory failure, heart failure or cerebral hemorrhage. All of these conditions can and will kill you if they remain untreated!

What to do if you Suspect Cocaine Overdose

The best thing that you can do for yourself or for someone else who may be overdosing on cocaine is to seek prompt medical attention. Call 911 to reach an emergency response team and make sure that the medical professionals are aware that you or your loved one is potentially overdosing on cocaine. Treatment is possible but it must be sought immediately to ensure that there is no further damage done to the organs or other areas of the body as a result of the toxic levels of cocaine in the body.

Many different types of treatment exist in a hospital setting if an individual has overdosed on cocaine. Most of the time, treatment will begin with the administration of benzodiazepines such as Valium or another sedative that can help to lower the heart rate and the blood pressure. This can alleviate some of the stress that is placed on the heart and may greatly reduce the risk of heart attack, stroke or serious heart damage arising from the overdose.

Cooling the body through the use of ice, blankets and other means can help to reduce the effects of overheating otherwise known as vasoconstriction. Cocaine-induced hyperthermia (overheating) can lead to muscle cell deterioration and renal failure so it’s important to keep the patient cool and comfortable as the drugs wear off. Acetaminophen may also be prescribed to help bring down the body temperature and to prevent further complications from arising as a result of the overheating caused by the drug overdose.

There is no official antidote that works for cocaine overdose. What this means is that if an individual has overdosed on cocaine, all doctors and health professionals can really do is work to alleviate the symptoms of the overdose that pose the most serious risks such as the high blood pressure, the rapid heart rate and the body heat. By controlling the symptoms that pose the most serious risks to the individual, cocaine overdose can effectively be treated and only minimal after-effects may be felt.

When in recovery, it’s important to remain abstinent and to stear clear of any future use of cocaine. Cocaine overdose is extremely dangerous and, if you’re lucky enough to live through it once, you should do whatever it takes to avoid the potential of future overdose as you’re already placed undue strain on your heart and other organs. Rest and time are the best tools for recovering from cocaine overdose once treatment has already been administered.

If you or a loved one is addicted to cocaine, call 800-736-5356(Who Answers?) today to get needed treatment help and avoid an overdose.